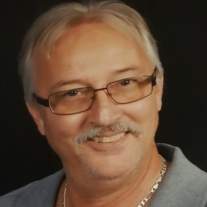 William Terry "Billy" Davis, Jr. of Trenton, FL passed away at his residence on Friday, March 29, 2019. He was 57 years old. Billy was born to parents William Terry and Mette Elsa Davis, Sr. on September 19, 1961 in Gainesville, FL and had been a resident of Trenton since moving from Gainesville in 1981. He worked for Bounds Air Conditioning and Heating and was a member of Union Baptist Church. Billy is preceded in death by his parents. He is survived by his wife of 37 years, Lou Ann Miller Davis and his son, Ira "Richard" Holland, Jr., both of Trenton; his sister, Deanne Davis-Gouge of Ocala; his Mother-in-law, Sally Jean Ashe of Trenton and his grandchildren, Zoey, Ira III and Landon Holland. Funeral Services for Mr. Davis will be held on Tuesday, April 2, 2019 at 11:00 AM at Union Baptist Church with Pastor Travis Moody officiating. Interment to follow at Union Baptist Church Cemetery. In lieu of flowers the family requests donations be made to E.T. York Haven Hospice in Gainesville.
To order memorial trees or send flowers to the family in memory of William Terry Davis, please visit our flower store.