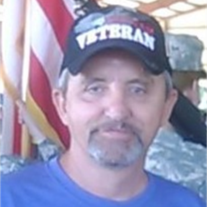 Richard “Rick” Tony Ridenour, age 64, of Trenton, FL, fought his battle of cancer for 10 years before finally going home to be with our Lord on July 30, 2017 at his home surrounded by his family. Born on August 20, 1952 in Indianapolis, IN, he then moved to Tampa, FL when he was 12 years old and grew up fishing and boating. At 19 years old he served in the Vietnam War as a door gunner on a Chinook Support Helicopter. Rick started in the Fire Sprinkler business after the war and found his passion in Fire Safety. In 1983 he married the love of his life, Lori, and in 1989 they moved with their two children to Trenton, FL. He built his own house piece by piece and it became a labor of love all while being Mr. Mom while Lori worked. Rick worked for the University of Florida (8 years) and for Alachua County Fire Rescue (5 years) as a Fire Inspector. He always strived to be the best he could be and that brought many awards including: the Fire Inspector of the Year award for the State of Florida in 2003, State of Florida Davis Productivity Award, an award from the Incentive Efficiency Program at UF in 1996 and he also achieved the title of Certified Fire Protection Specialist (CFPS) during his time as a Fire Inspector. He was also an active member of several organizations including: Florida Fire Sprinkler Association, American Fire Sprinkler Association and Florida Fire Marshals & Inspectors Association. Rick went to work for Gator Fire Equipment Co. as Operations Manager in 2005 and retired in 2014. Rick was a devoted husband, father and Poppi. Rick loved the outdoors, boating, swimming, fishing, and kayaking. He always had a project going on around the house always building or fixing something. He also helped a lot of family and friends with projects. He loved sitting on his deck looking at the lake, spending time with his family and being the BEST Poppi to his grandkids. Rick was preceded in death by his Mother Hazel Hardy, Father John Ridenour, Brothers Johnny Ridenour and William “Billy” Ridenour and his Mother-in-Law Sharon Schwieterman. He is survived by his loving wife of 33 years, Lori Schwieterman Ridenour, Daughter Brittny (Kenny) Keeling, Son Jarod (Megan Mathis) Ridenour, Grandchildren Karlee and Kelton Keeling, Saydee and Kash Ridenour, and Skye Mathis, Pop Bruce Hardy of Trenton, Sisters Sue Peppers of Trenton and Mary (Roger) Perdue of Trenton, Father-in-Law Bob Schwieterman of Trenton, beloved nieces and nephews and many extended family members. Rick’s quick wit and loving hugs will be deeply missed by his friends, family and all who knew him. A Memorial Service will be held at 4:00 PM on Friday, August 11th at Watson Funeral Home at 426 W. Wade St. in Trenton, Florida with Pastor Andy Cook officiating with the family receiving friends for 30 minutes prior. Memorial Contributions can be made to Trenton Animal Hospital "Max's Fund, 603 N. Main St., Trenton, FL 32693.
To order memorial trees or send flowers to the family in memory of Richard Tony Ridenour, please visit our flower store.