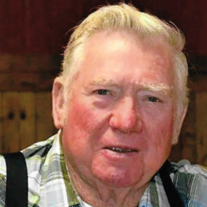 McCoy Junior Hilliard of Bell, FL, passed away at his home in the early morning of November 13, 2017. He was 77 years old. Mr. Hilliard was born in Bell on March 8, 1940 to Alvis and Alice Hilliard and was a lifelong resident. He was a farmer and a member of New Hope Baptist Church. He was also a member of the Loyal Order of Moose, a 32nd Degree Master Mason with William T. Carlton Lodge #46 in Trenton, FL and a Shriner with the Morocco Temple in Jacksonville, FL and Suwannee River Shrine Club in Fanning Springs, FL. Mr. Hilliard is preceded in death by his parents; his daughter, Kathy Suzanne Hilliard; his son, William Keith Hilliard and his brother, Donald Hilliard. He is survived by his wife, Clyda Mae Hilliard; his daughters, Karan (Patrick Fisher) Hilliard and Katina (Bill) Caldwell of Bell; his sister, Margaret Hilliard of Bell and his brothers, Larry Hilliard of Bell, Harold (Sharon) Hilliard of Ocala and Wendell (Peggy Sue) Hilliard of Bell; eleven grandchildren and eighteen great-grandchildren. The family will receive friends at the funeral home on Wednesday evening, November 15, 2017 from 5:00 until 7:00. Funeral Services will be held at 11:00 AM on Thursday, November 16, 2017 at New Hope Baptist Church with Pastor Billy Philman officiating. Interment to follow at New Hope Cemetery.
To order memorial trees or send flowers to the family in memory of McCoy Junior Hilliard, please visit our flower store.
Send a Sympathy Card