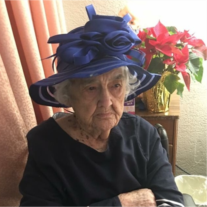 Mardrit Hazel (Polk) Thomas passed away in Trenton, Florida on February 17, 2018 at the age of 98. She was a member of Bethel Baptist Church. Hazel was the oldest daughter of John Aaron and Alice Alda Polk. Her family owned a farm between Cherry Sink and Lottieville communities. When Hazel began school, she walked several miles from her home to the one room school house at Cherry Sink. She later transferred to Trenton high school and graduated in 1937. Hazel met Horace Thomas who was a star basketball player from Bell, Florida and they were married December 23, 1937. They lived in Bell, Florida for a few years on his family farm and later moved to Trenton where they purchased a farm, raised four children and Horace served for 32 years as Gilchrist County Clerk. Hazel was a homemaker, was always available to her children and supported all of their academic and sports activities. When she was not busy caring for her family, Hazel loved planting and growing flowers, reading, traveling, and spending time at their second home in Suwannee, Florida. Hazel is survived by her four children, Doyle (Lorene) Thomas, Sue (Joe) Lander, Don (Brenda) Thomas and Alda Griffin. She also leaves behind 10 grandchildren; Mike Thomas, Kyle Thomas, John Thomas, Andrew Thomas, Joey Lander, Lindsey Lander, Kevin Thomas, Jarrett Thomas, Allison Cooper, Amber Rollison and 30 great-grandchildren. She is also survived by her sister, Elizabeth Douglas. Hazel was preceded in death by her husband of 78 years, Horace Thomas, her son-in-law Tom Griffin, Grandson, Mark Griffin, and her brother Hilbert Lord. Funeral services will be held at Bethel Baptist Church in Trenton on Wednesday, February 21, 2018 at 3:30 PM. The family will have a viewing and receive visitors one hour prior to the service. Burial will follow at the church cemetery.
To order memorial trees or send flowers to the family in memory of Mardrit Hazel Thomas, please visit our flower store.