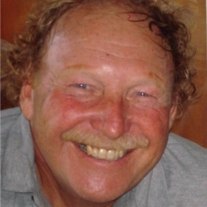 Jerome "Jerry" Lawrence Blake, 74 years old, of Trenton, FL, passed away on March 16, 2018 in Lithonia, GA. He was born on February 23, 1944 to Lawrence W. and Elizabeth M. Blake in Melbourne, FL and had been a resident of Trenton since moving from Gainesville, FL in 1979. Mr. Blake proudly served his country in the Navy on active duty and as an Army Reserve Officer. He retired from the Army Reserves as a Captain with 22 years service. He was a graduate of Melbourne High School and the University of Florida with a BS in Medical Laboratory Sciences. He had a varied career which included laboratory medicine, Dixie County health inspector, hardware clerk, attendant at Dockside Marina in Horseshoe Beach and most recently clam farmer. He was an Eagle Scout and enjoyed family gatherings, the outdoors and activities with his grandchildren. Jerome was of the Catholic faith. Jerry never meet a stranger - only new friends to talk to and perhaps share directions and a map. He is preceded in death by his parents; by his wives, Barbara Ann Machkovich Blake and Carmen Morris Blake; his sons, Christopher Jerome Blake and Thomas James "TJ" Blake; his sister, Cheryl Ann Schmidt and his brother, Richard S. Blake. Mr. Blake is survived by his daughters, Dawn M.(Peter) Leone of Fayetteville, NC, Katherine M.(Geof) Gowan of Gainesville, FL, and Heather A.(Chris) Blake of Trenton, FL; his sons, Michael J. (Tiffany) Blake of Ripon, WI and Stephen J.(Kelly) Blake of Bradenton, FL; his step children Daniel Morris and Joy (Richard) Hurley; his brother, George E. Blake of Horseshoe Beach, FL and his significant other, Martha Abney of Lithonia, GA. He also leaves behind six grandchildren, four step-grandchildren and four step great-grandchildren. Funeral Services will be held in the chapel at Watson Funeral Home on Thursday, March 22, 2018 at 3:00 PM with Father Joe McDonnell officiating. Interment to follow at Trenton Cemetery. The family will receive friends at the funeral home Wednesday evening, March 21, 2018 from 5:00 to 7:00.
To order memorial trees or send flowers to the family in memory of Jerome Lawrence Blake, please visit our flower store.