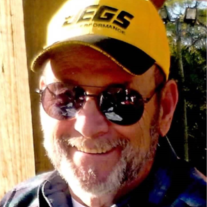 Jack Michael Anderson of Bell, FL, passed away on Wednesday, October 10, 2018, at the Suwannee Valley Hospice Care Center, in Lake City, FL. He was 78 years old. Jack was born on April 18, 1940, in Gainesville, FL, the second child, of Willis W. and Malvine Anderson (nee Andrison). Much of his childhood, through early adulthood, was lived in Leesburg FL. There, from his father, he developed a lifelong love of fishing, and motorcycles, along with a bit of wanderlust, which was manifested through working, hunting, fishing, and exploring much of the US from Florida to Alaska, and from New York to California. As a teenager he met the lovely, former, Shirley Ann Arnold, of Wildwood, FL when he dropped by her house, to visit her sister. The attraction was instant, and led to romance, and marriage in 1957. The two started with little more than a rented, two room, apartment, some groceries, and $2 in cash to hold them over until payday. Jack had a strong work ethic and he held many jobs in his youth. He started out his full-time working career, as a “tree surgeon”, and later worked for phone, and utility companies in Leesburg and Orlando. The major break in his working life was the opportunity to work on an electrical line, construction, crew, in the early 60s, which through experience, training and testing, developed into a 50+ year, career as a Journeyman Power Lineman. He was a proud, card carrying, member of the IBEW, from that point to the end of his life. He built high voltage, power lines, all over Florida and throughout the US. He moved his family to Bell, FL., in 1972, by purchasing a small farm. For several years he farmed, and supplemented his income by continuing to do line work, usually during and after major storms, where the work hours were long, but profitable. He raced open wheel cars, most of his life, and was known as an innovator and master mechanic. He spent countless, blissful hours, in his shop, where he could always be found working on multiple, on-going projects. His work led him to his beloved, adopted, home state of Alaska, where he maintained multiple residences for over 20 years. The move to Alaska allowed him to better provide for his family, and to quench his desire to hunt, fish, restore cars and motorcycles, and race cars. There he became a licensed, private pilot, and purchased and restored his own, 5 seat, Aeronca airplane, which was used on countless, moose, carabao, and bear, hunting, trips. The plane was usually on “floats” which allowed him to land on rivers, lakes and inlets all over Alaska. He would also use the plane for trips with his wife; going on romantic shoreline cookouts, Alaskan bush style, of freshly caught trout, or grayling, and a little siesta before flying home. While living in Alaska he and his wife maintained a small farm and home in Bell, where he semi-retired in 1998. A self-proclaimed working man, a Journeyman Power Lineman, and Certified Welder, he continued to work after retirement, even starting several small businesses, including trucking, well pump repairs, sand blasting. He was a member of the informal Hot Rod Club of Bell, and developed many new friendships with like minded guys who loved cars, boats, motorcycles, and “bench” racing. He was fiercely loyal to his union, and his friends. Though tough, he could also be uncommonly, generous to acquaintances, and strangers alike, with his time, money, and expertise. Starting with little, grounded by a loving, and strong wife, he was able to pull himself up by the bootstraps, creating a comfortable life, and retirement. He was guided by strong principles and more than a little determination and stubbornness. He was the consummate provider. Together, Jack and Shirley raised a family and achieved the American Dream. As attested by his family, friends, and even his foes: He was a one-of-a-kind, and did it his way; at least as much as a man can. It was a life richly and well lived. Jack is preceded in death by his parents, as well as a younger brother, David Anderson (Kathy) of Tifton, Georgia. He is survived by his wife, Shirley of Bell; his two sons, Michael Anderson of Kasilof, Alaska, and Rod Anderson (Suzanne), of Tampa, FL.; and his daughter, Roxanne Stone (Shawn) of Kasilof, AK.; his brother, Willis W. Anderson, Jr. of Milton, FL; his sisters, Carol Davis of Milton, FL and Gay Kauf, Carlisle PA.; his six grandchildren Kristen, Lisa, Brittni, Brody, Jackson, and Blake; and one great-grandchild, Chayse; along with numerous nieces and nephews. He is also survived by his beloved, American Bulldog, Buster. A Memorial Service is planned for November 10, at 3:00 PM, at Watson Funeral Home in Trenton, FL. A reception will follow with plans to be announced soon.
To order memorial trees or send flowers to the family in memory of Jack Michael Anderson, please visit our flower store.
Send a Sympathy Card