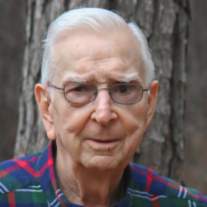 Harold King Mikell, 92, died on September 15, 2018 at the Big Bend Hospice House in Tallahassee after a brief but fierce battle with cancer. He died as he lived: peacefully, surrounded by family and friends who loved and respected him. Harold was born to King M. and Ollie Estelle Mikell in Trenton, FL. After graduating from high school, he served his country as a radio operator and tail gunner for the United States Naval Corp in World War II. He returned home after the war to court Juanita Beauchamp, the love of his life, and to study forestry at the University of Florida. In 1950, he married one and graduated from the other, beginning a lifelong devotion to both. Harold’s passion for forestry led him to a career with the Florida Forest Service immediately after graduation. Forty-two years later, he ultimately retired as its director, having been responsible for the planting of more than five billion pine trees and the implementation of controlled burning practices that were later mimicked across the country. His work has been recognized with a variety of prestigious awards, including induction into the Florida Agriculture Hall of Fame, the Society of American Foresters Hall of Fame, the National Bronze Smokey Bear Award, the Florida Forestry Association Distinguished Service Award and multiple alumni awards from his beloved University of Florida. After retirement, Harold and Juanita planned to return to Trenton to a quiet life working on their Tree Farm. However, Harold was never one to turn away from a call to service. A visit to his congressman, Rep. Pete Peterson, to discuss legislative issues concerning forestry led to his agreeing to work with the newly elected official for six months as his liaison to the agricultural community. He retired from that position 17 years later, having also filled the role for Rep. Peterson’s successor, Rep. Allen Boyd. Harold’s passion for forestry and agriculture burned brightly throughout his life, but it was a pale glow compared to his passion for his family. He was a loving and devoted husband to Juanita for 63 beautiful years who passed away in 2013; an affectionate and supportive father to their daughter, Patti; and a beloved and adoring grandfather to Annie and Lacey. Harold leaves behind a legacy of continuing excellence and inspired leadership. For many, he was a mentor and a friend; for even more, he was the best possible example of a life well lived. He was a loyal member of the Timberlane Church of Christ and a walking testament to the faith he professed. A visitation will be Thursday, September 20, 2018 from 5:30 to 7:30 P.M. at Watson Funeral Home. Graveside Services will be held on Friday, September 21, 2018 at 11:00 A.M at Trenton Cemetery, with Mr. Lee Jamieson officiating. A celebration of his life will be held at a later date at the Timberlane Church of Christ in Tallahassee. In lieu of flowers his family request that donations be made to a charity your of choice.
To order memorial trees or send flowers to the family in memory of Harold King Mikell, please visit our flower store.